What’s behind the passive components shortage?

While the focus in recent years has been on the miniaturization and improved performance of passive components, it is now often simply a question of their availability.

Oliver Konz, Würth Elektronik eiSos: »Even in the current situation, prioritization is out of the question for us; that would contradict our concept of service leadership. We stand for availability and predictability. «

The topic of delivery reliability has dominated the agenda of buyers and developers in the European industrial electronics and automotive industries for over a year.
Even if some people no longer want to hear it – the delivery situation for passive components varies from product group to product group – it’s still more than unsatisfactory. In particular, from the buyer’s point of view. After the recession of the years 2008/09 to early 2017, they were able to enjoy an exceptionally good buyer’s market. In principle, everything was always available, orders were placed as late as possible and the market situation also ensured that price developments, especially for standard and legacy products, only knew one direction: downwards.

The long disregard of signs, which indicated that something was changing in the market, is probably also due to this abundance mentality. “According to our observation, delivery reliability completely broke down just over a year ago,” recalls Joachim Pfülb, Sales Manager at Beck Elektronik Bauelemente. “We actively drew the attention of buying customers to this development, but then heard from them that there were no delivery problems and we were the only ones warning of a shortage.” Just salesman’s talk.

Reinhard Sperlich, Vice President Sales at Murata, is also in agreement that timely warnings of shortages were given. “In March 2017, we pointed out the development for the first time, in July last year then a second time, and finally in January this year for the third time.” Reinhard Sperlich got the impression that only after the third letter did the addressees actually read the letters and incorporate the information contained therein into their own ordering strategy – when the problems began to become obvious.

In the meantime, the industry has found various answers to the question of how this could have happened at all, after having seemed to be totally surprised by the development at the end of last year. An explanation for the automotive industry has now been found. Evidently the strong fragmentation in this industry in Tier 1, Tier 2 and partly Tier 3 suppliers, with a significantly increasing demand for components in the automotive industry, led to the responsible departments of the automobile manufacturers and their Tier 1 suppliers somewhat losing the overview of the real component requirements, and thus an early recognition of the emerging situation was prevented.

For Joerg Frodl, Director Product Marketing Europe at TTI, the fact that Europe was only hit by the delivery difficulties with a time lag has a lot to do with the fact that “many of the high volume demands that occurred, for example in the areas of electric vehicles, consumer goods and mobile phones, were generated in Asia and the development there was only communicated to Europe with a certain delay.” In addition, over a longer period of time, this communication only took place via the relevant order confirmations.

To get an idea of the massive increase in demand in some applications, it is worth taking a look at some applications that exert a particularly large pull effect on passive components. For instance, Apple’s top product, the iPhone X, uses around 1,300 multilayer ceramic capacitors (MLCCs). In the previous generation of top smartphones, it was about 700 to 800 MLCCs. The development in the automotive industry is similar. Here, according to industry experts, the demand for capacitors now stands at 10,000 capacitors. In the past, there were 2,000 or 3,000 capacitors in well-equipped cars.

Since possibilities for approval are very limited, especially in the automotive industry, and in some cases only one or two manufacturers are approved for certain components, the automotive industry has responded sustainably to the situation that has occurred. “Allocation managers in the automotive industry were only concerned with semiconductors, but now, such active technology and production management is also being practiced for the areas passive and electromechanical components,” describes Reinhard Sperlich, Murata, the change. In addition to that, major automotive companies and their Tier 1 suppliers have secured entire production lines exclusively for themselves.

In the last two years, almost something like the “perfect storm” has occurred in the area of passive components supply and this also has to do with the fact that a number of manufacturers have gradually abandoned the topic of standard and legacy products. Above all, this applies to products such as MLCCs in 0603 case size and larger as well as capacities from 1 nF to 1 µF at 50 V. “The return on investment in this area has left much to be desired for several years already,” says an industry expert, “and a number of companies have therefore drawn the necessary consequences and discontinued their unprofitable business.” 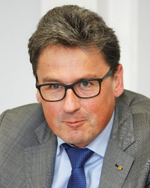 Josef Vissing, TDK: »We have now built up additional production capacities for all products with critical delivery times. Therefore, delivery times should be noticeably shortened by 2019 at the latest.«

The Winners of the embedded award 2021

Digitalization for the industry