A New Standard for the Automotive Industry

A new alliance of OEMs and suppliers is committed to standardizing SerDes connections in the car. Until now, only proprietary solutions have been available for the link, which is frequently used for sensor connections.

In vehicles, cameras and displays are often connected to the image-processing ECU via a SerDes connection (serializer/deserializer). To date, there are only proprietary solutions available that are not compatible with each other. Now, SerDes is to be standardized for automotive applications with the help of the Automotive SerDes Alliance (ASA) founded by BMW, Continental and others. "We want to create a win-win situation for everyone involved by creating the basis for a comprehensive eco-system and significantly expanding the available product range", Kirsten Matheus (BMW), who heads the technical working group in the alliance, told Markt&Technik. Stefan Brunner (Continental), Chair of the Steering Committee, adding "The ASA was created to make real competition possible through standardization”.

The official kick-off was a meeting in May in Salt Lake City, attended by BWM, Continental, Broadcom, Fraunhofer IIS, Marvell and NXP as founding members. In the meantime, Hyundai, Gebauer & Griller, Sony, JAE, Rosenberger, TE and the Research and Transfer Centre of Zwickau University of Applied Sciences (FTZ) have also joined. According to Matheus and Brunner, other companies - including large OEMs - have already announced their intention to join the alliance, but are still under legal review, which is why explicit naming is not possible at this time. Overall, the reactions from the industry are very positive, reports Matheus. In a survey of 28 OEMs and Tier-1s, almost 90 percent showed fundamental or even large interest in SerDes standardization.

BMW in particular has been thinking about this topic for quite some time, and the first discussions took place as early as 2012. The decisive factor for initiating the ASA activities was the switch from complete SerDes systems from one supplier, for example for a Surround View solution, to a free combination of ECUs from different manufacturers. "As an OEM, you also have to define the communication technology between the ECUs, which leads to problems with component selection and interoperability in the absence of a standard," says Matheus.

While Matheus, who played a key role in the introduction of Automotive Ethernet, otherwise pushes for a strong standardization of the vehicle network in favour of Ethernet, she relies on an own standard for SerDes connections: "Ethernet is a networking technology with extensive functions. Typical SerDes applications, however, are sensor connections in the form of pure point-to-point connections as asymmetric links - for example, you don't need a large data rate on the return channel and, accordingly, no echo suppression. Basically, I see SerDes in the same category as classic sensor connection technologies such as PSI 5 and SENT." Today, Ethernet is still oversized for such a purpose, also in terms of costs and power consumption 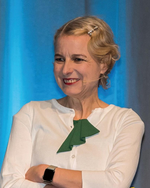 Kirsten Matheus, BMW: "With the Automotive SerDes Alliance, we want to create a win-win situation for everyone involved".

Seite 1 von 2
1. A New Standard for the Automotive Industry
2. Creating an Open Market for as many Participants as Possible

»We are on the verge of a breakthrough«

Energy density up, production costs down

Strong Focus on the Automotive Segment

The powertrain of e-vehicles rethought

Research based on AI

On the way to autonomous rail traffic