As of October 1, 2020, Wolfram Harnack is the new managing director of Rohm Semiconductor Europe GmbH based in Willich-Münchheide.

For Wolfram Harnack it is in fact a return to ROHM, as he joined ROHM as Sales Director in January 2008. Prior to that he worked for Toshiba Electronics Europe for 12 years. In 2015 Wolfram Harnack left ROHM and joined Mitsubishi, but now he decided to take on a new challenge: He returns with impressive success achieved under a different flag, to now set the course for ROHM´s future in Europe: »Together with Toshimitsu Suzuki, my mission is to further accelerate our growth in the Automotive and Industrial segment, particularly in the Power and Analog domain which is the Company Focus. I’m confident that I can contribute to the success of ROHM Europe with my experiences but more importantly, with my passion«, explains Wolfram Harnack: »ROHM's target is to significantly grow sales outside of the Japanese domestic market. The European region will play an important role in accomplishing this objective. Being a technology leader in power semiconductors, I see great growth potential for ROHM in the automotive and industrial sectors.«

Wolfram Harnack has spent most of his working life in Japanese companies, demonstrating his enthusiasm and understanding of this culture. He holds a degree in Electrical Engineering.

»We are happy that we were able to win back Wolfram. Many things have changed since he’s been with us in the 2000s, but he will see many familiar faces and surely set many new accents. Especially his wealth of experience in the power semiconductor sector will be a great enrichment for us,« affirms Toshimitsu Suzuki, President of ROHM Semiconductor GmbH. 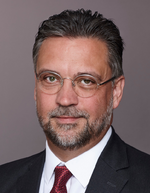 Wolfram Harnack is the new Managing Director of Rohm Semiconductor Europe: »Together with Toshimitsu Suzuki, my mission is to further accelerate our growth in the Automotive and Industrial segment, particularly in the Power and Analog domain.«

Opening of Factory 56 in Sindelfingen

Flexible Production of the Meredes-Benz EQS and…

Porsche Has Produced Electric Drive Housing from a 3D Printer …

Power is better with GaN, Apple!

Reliable figures on accidents with e-scooters for the first time …

Is a Ubiquitous Automotive Ethernet (still) the Right Goal? …