Like all other units, the kilogram has been defined by a natural constant since May 20th 2019. The Avogadro experiment counts atoms in a perfect silicon crystal sphere.

Is a meter a meter and a second a second? Yes, but they will be defined differently from May 20th on. This marks the beginning of a new era for science.

Certain reference values have so far defined what a meter is or how long a second lasts. In order to define an ampere for example, two current-carrying conductors had to be tensioned strictly parallel at intervals of one meter. This led to the creation of the international unit system (SI). It is supported by almost 100 countries.

New rules have been in force since May 20th: Natural constants now define the base units kilogram, meter, candela, ampere, Kelvin, second and mol. The changes were approved by the General Conference on Weights and Measures held this year in Paris. The decision is based on years of research and experiments at various international metrology institutes, including the »Physikalisch-Technische Bundesanstalt« (PTB) in Braunschweig. Thus, the values of the respective natural constants could be determined very precisely.

The decisive factor for the reorientation was, among other things, the change of the indigenous kilogram. It consists of a cylinder made of platinum and iridium and is stored in a safe at the International Bureau of Weights and Measures (BIPM) in Sèvres near Paris. It has become 50 millionths of a gram lighter, as comparisons with copies have shown. There were also problems with the Kelvin unit: The reference value has so far been a fixed point on the water scale. However, this point depends on the isotopic composition of the water and is therefore not constant.

In Versailles in November 2018 at the General Conference of the Metre Convention, all delegates voted for the definition of natural constants in SI units.

Units of measurement such as the meter or the second have long been defined by natural constants such as the speed of light. This was also the basis for research into other quantities such as kilograms. In this way, quantities such as energy, pressure or ampere can be derived. The Planck constant h, the Avogadro constant NA, the Boltzmann constant k and the charge of the electron e were used for the new determination. All seven basic units were derived from it.

For the kilo, the definition works like this: The researchers have counted how many atoms of a high-purity silicon sphere result in exactly one kilogram. If the mass of the sphere changes, the researchers now know the exact number of atoms.

For science, the reference to the natural constant is a step forward, since the definition is now universal. In application, the distinctions between basic units and derived units in the new SI are no longer necessary. The gain lies primarily in the accuracy. Applications such as quantum technologies or diagnostic possibilities in medicine benefit from this, as do industry with new possibilities in the fields of measurement and calibration. 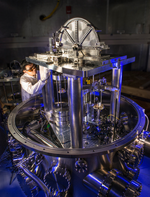 The new kilogram was also defined by the experiment with the watt-weigher.

No change for private persons

For private persons, however, the changes will hardly be noticeable. A personal scale, for example, is simply not calibrated so accurately. Pupils, on the other hand, will demand more from the new definition because it is more complicated and difficult to understand.

The PTB and the »Deutsches Museum« in Munich offer all technology enthusiasts an insight into the innovations. To do so, they have set up a permanent exhibition on the subject.

Where Investments were made in new Semiconductor…

Electrification of the Vehicle

»Many reasons to use proven third-party SLAM-software«

Standards and first products are ready