Integration of sensors, memory and processor

CEA-Leti's research activities cover the last two areas. "So far we've been using GPUs because there's nothing better," says Sabonnadiere. In the future, however, hardware architectures are needed that combine sensors, memory, CPU and GPU in a more balanced way on a single chip. Instead of integrating memory into the microcontroller, it might be more a matter of integrating computing units into memory. The reason is that CEA-Leti researchers have identified loading data into memory as the largest consumer of time and energy. Data transfer between memory and processor today costs much more than calculation, both in terms of time and energy consumption. Data transfer and memory access account for up to 90% of the system's energy consumption, and since applications such as artificial neural networks rely on large databases and simple computing operations, reducing data movement becomes critical.

Stacking memory on processors to shorten physical connections is part of CEA Leti's long-standing research into 3D circuits. The Institute is also pursuing new memory designs that enable addition, subtraction, and Boolean logic to be performed in SRAM. The space costs are negligible and, more importantly, the data never leaves the memory. These in-memory computing (IMC) processors have great potential for applications such as neural networks and cryptography.

In the future, the integration of resistive non-volatile memories (NVMs) such as OxRAM and PCRAM on the chip in the immediate vicinity of CMOS operators will be sought in order to minimize data movement and even the merging of memory and processor elements into hybrid operators - an approach that would enable analog computations by, for example, interconnecting lines during an addition instead of performing the addition by memory operations.

These approaches are not general-purpose computer solutions. But they have great potential as flexible, cost-effective AI add-ons to traditional processors, with dramatically improved performance and energy efficiency in certain applications.

The start-up company Diabeloop is developing a system that controls the insulin pump for type 1 diabetics without the patients having to worry about blood glucose monitoring. The system uses a blood glucose sensor (Dexcom G6), which is worn on the arm like a patch for up to ten days and measures the glucose content of the tissue with a tiny needle. Every five minutes, the sensor sends the value to a handheld device that controls the insulin pump. The handset looks like a smartphone but is a proprietary device. The AI algorithm is pre-trained and adapts over time to the patient's individual response - some insulin works within 30 minutes, others within four hours. 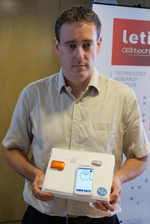 The patient only has to tell the handset when he or she is eating, otherwise it displays the blood sugar level and autonomously regulates the insulin pump. This is particularly useful for patients at night. The system is currently in the approval process. The goals for further development are to extend battery life and to miniaturize the handset into a
wearable Smart Watch.

Meeting the Challenges of the Future with Innovation

Framework program gets the finishing touches